You Are Here: M1: Inside Out Rothenburg ob der Tauber: In front of the walls of a fairy tale city (student idea competition)

M1: Inside Out Rothenburg ob der Tauber: In front of the walls of a fairy tale city (student idea competition) 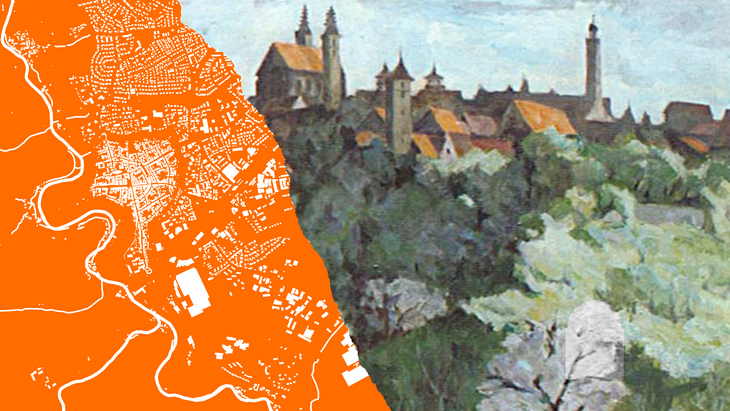 If you look at Germany's top 100 sights (published by the German National Tourist Board), the first city to appear there is not a metropolis, but Rothenburg ob der Tauber. Just behind Neuschwanstein Castle and ahead of Hamburg, Berlin or Dresden, Rothenburg ob der Tauber, with just 11,000 inhabitants, manages to attract up to 1.9 million tourists a year (before the pandemic). The main attraction is the historic Old Town, almost half of which was rebuilt after the Second World War. The city center is completely enclosed by a walkable fortification of city walls and green ramparts and lies in the idyllic river valley of the Tauber.

Beyond these walls, however, little of the old town charm can be recognized. Large parts of the green wall are occupied by parking lots, the surrounding paths and streets are confusing and oversized, few places with quality of stay can be identified, and the urban structure is in need of an appropriate reorganization in parts. The city wall and rampart not only form a physical caesura, but also create a clear urban separation between the interior and exterior.

In the course of the ideas competition, which is being held jointly with the city of Rothenburg ob der Tauber and the Hotel Villa Mittermeier at RWTH Aachen University, the task is to understand this culturally valuable site, to deal with its history and urban identity, and to develop an attitude regarding the interior and exterior of the city walls. How does one deal with these sensitive issues? What does it mean for this historic place? What must planning look like that brings the interior flows to the outside as well as the outside to the inside? How can segregation be prevented and urban planning be thought integratively?

The goal is to develop a holistic planning for the city of Rothenburg that diagnoses/identifies the problem areas of the city and offers creative solutions so that the two worlds in front of and behind the city walls can better communicate with each other. Current developments, such as post-pandemic urban design, monument protection and climate protection, etc., are of course to be taken into consideration.

In addition to the overarching consideration of the entire city of Rothenburg, it is important to concretely deepen the elaborated findings and topics in a focus area in the second section of the semester. The chosen building site for this is located at the north-eastern entrance to the old town, at the Würzburger Tor/Galgentor. The central task here will be to redesign the city center and the surrounding entrance situation in a new and appropriate way and to set an example for the other city gates. Important here is to strengthen the connection inside and outside the city wall.
This includes the ensemble of the hotel "Villa Mittermeier", which is to be extended by a further hotel building block. The buildings of the Gasthof Zur Linde and the Hotel Rappen could also be further considered and taken into account in a higher-level design concept. By upgrading the city center, impulses can be sent to the entire city of Rothenburg ob der Tauber.

In the supplementary module of the project, we will jointly plan and design a project exhibition in the Rothenburg Museum, which will be opened following the Aachen final colloquium.

The excursion is expected to take place during the first week of May from May 2, 2022 to May 6, 2022. Arrival and departure are self-organized, we will stay collected in the DJH youth hostel Rothenburg ob der Tauber.