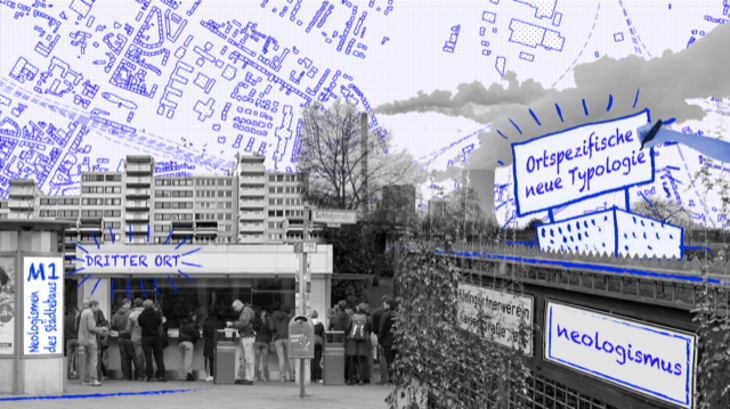 Until now, architecture has exclusively referenced the material cultural heritage in design processes.  This usually involves identifying the decisive fragments of the original form of a typology, making use of its repertoire of forms and then transferring a new interpretation of selected elements in the design process.

Mobility hub, vertical farming, urban gardening and shared spaces...
- Anglicisms for sustainable, innovative and social spaces have been shaping the jargon in the urban planning discourse of the 21st century for some years now: emerging neologisms of typologies, "hardware" such as hubs in neighbourhood development and „joker rooms“ in housing, whose derivation is often an unaltered derivative of reference projects from the same decade.

The consideration of intangible cultural heritage as "software" and the respective regional reference seems undifferentiated as contextualisation in transfer. Time to ask the question:
How can the "software" of communal functions be considered in a site-specific way in the design process of the new "hardware"?

Snack bar, allotment garden club, football pitch, MGOs (migrant self-organisations), community centre....
- As early as the end of the 1980s, the sociologist Ray Oldenburg coined the term "third places" for this kind of "software", which he used to describe places between home and work that had eight characteristics to varying degrees:
They are neutral ground, there are no social distinctions here (low-threshold), there is a regular audience, conversation is encouraged, the place is always accessible, function takes precedence over appearance, the atmosphere is playful, it is like a second home.

The prevailing "software" seems to be mostly created "bottom-up" by the users beyond the period of creation and less designed by architects and urban planners.

"Neologisms of urbanism" want to be both: a "hardware" to be designed as an innovative shell, a "software" for a social programme as a core. - site-specific for users of a region.

Collin Rowe and Fred Koette approached the question of new creations of building typologies of modernity from a planning and theoretical perspective with "Collage City". On the one hand, their approach enabled critical comparison and, on the other hand, it brought forth new perspectives in dealing with the design of typologies.

In the format "Neologisms of Urban Design", therefore, new creations such as hubs are to be graphically processed and critically reflected on the one hand and further developed for design on the other.

In a second step, the "hardware" (the neologisms) is to be developed with the "software" (a selection of third places already analysed in the research field series "derive") into a new typology in a workshop format with the help of the collage technique.