Stegreif: Intangible Venice - about permeability, porosity and resilience in the everyday 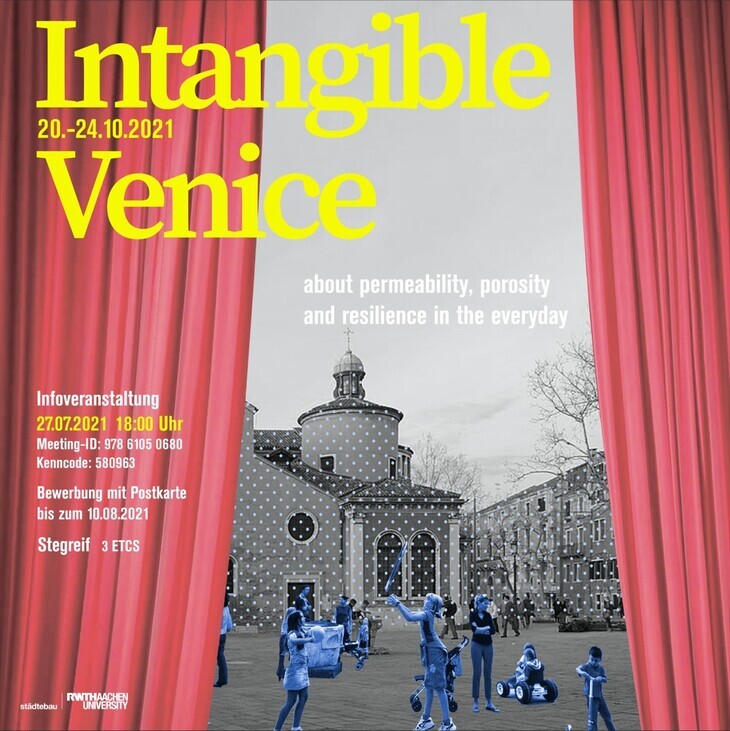 Terms such as "porosity" and "permeability" have dominated the discourse on Venice's urban form for many years. While Venice, with its sheer number of bridges, squares and churches, was once coveted not only as a popular pictorial motif, host to important events for artists and cultural workers, and famous for the Venetian carnival, today it has become a symbol for housing shortage. Last but not least, the globally identity-creating lagoon city is increasingly attracting attention due to headlines about the increasing pressure of the approaching "doom" by cruise ships.

While scientists have long since predicted the uninhabited sinking Venice of 2030 and the locals are gradually being displaced to the port city of Mestre (Picherl 2012), the city is trying to bring the out-of-control tourism numbers down to tolerable levels with measures such as the levying of a tourism fee and mooring bans.

If, on the one hand, the porous city is being forced to its resilience limits by its short-term overpopulation due to day tourism, increasing capital investment in Venice's housing market and accompanying vacancies and sell-offs are causing the city to die in other ways.

Salvatore Settis, raises questions about "the soul of the city" in the discourse surrounding Venice's sellout (Settis 2020). Consequently, it can be asked how much life makes Venice alive and how much is tolerable for the, built in water, unique city?

The porosity of the facades, the water-permeable passage via bridges, and the squares themselves, which are often equipped with high-water devices, form in their interplay the stage for the action that takes place in the public space: the everyday activity and togetherness of the inhabitants.

So while tourists push their way through the density of the city through street corridors, the many squares with their playfulness for different durations invite them to linger. The so-called "campi" are target-group-specific contact points for locals and strangers and thus the living room of the neighborhoods. As islands in the water-woven Venice, they are the connecting links between the individual city blocks.'

Lynch, in referring to the liveliness of a city, prefaces 'Image of the City' with the question of what the city means to people (Lynch 1960).

Similar to Lynch's attempt to identify the legibility and memorability of a city in order to evaluate the liveliness of a city's form, the Stegreif wants to invite to make tangible the intangible "immaterial" of a city's soul and to develop a methodology to capture this "software" of the city, which takes place in the colorful hustle and bustle of Venice's campi.