You Are Here: 5 May I Dr. Mario Paris 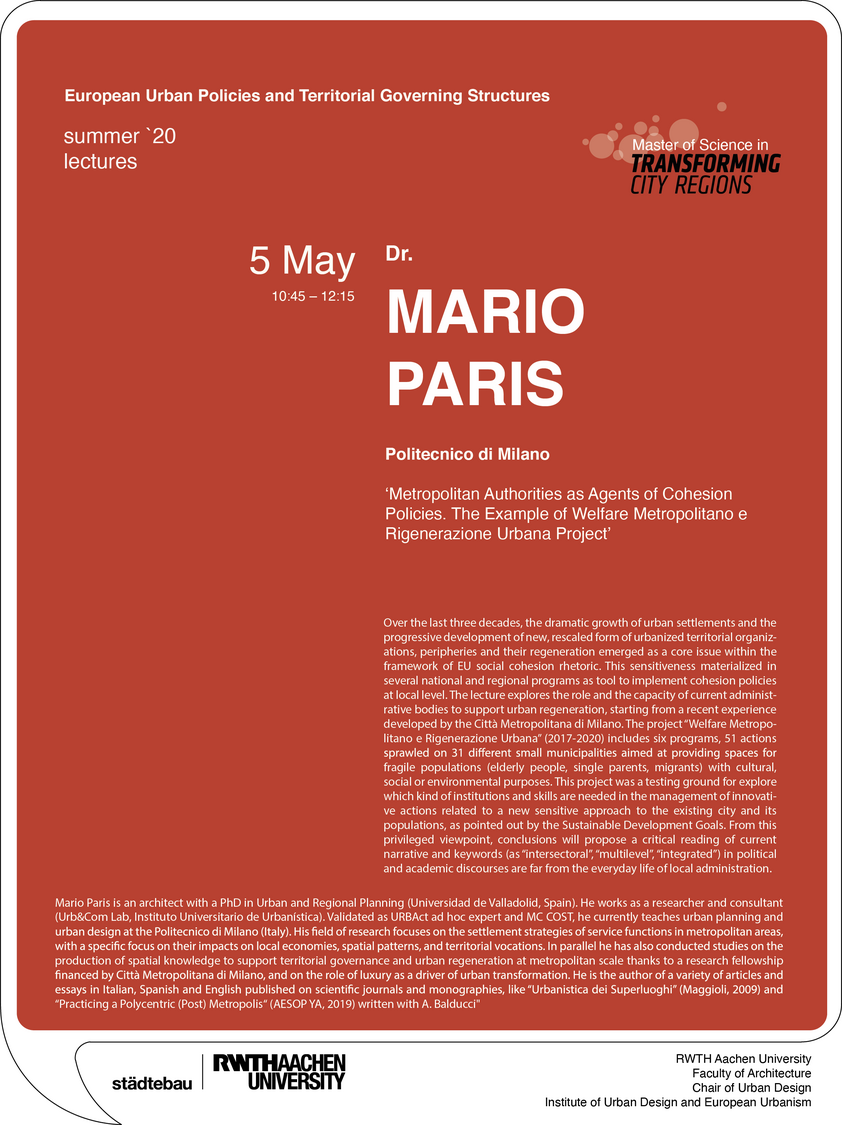 Over the last three decades, the dramatic growth of urban settlements and the progressive development of new, rescaled form of urbanized territorial organizations, peripheries and their regeneration emerged as a core issue within the framework of EU social cohesion rhetoric. This sensitiveness materialized in several national and regional programs as tool to implement cohesion policies at local level. The lecture explores the role and the capacity of current administrative bodies to support urban regeneration, starting from a recent experience developed by the Città Metropolitana di Milano. The project “Welfare Metropolitano e Rigenerazione Urbana” (2017-2020) includes six programs, 51 actions sprawled on 31 different small municipalities aimed at providing spaces for fragile populations (elderly people, single parents, migrants) with cultural, social or environmental purposes. This project was a testing ground for explore which kind of institutions and skills are needed in the management of innovative actions related to a new sensitive approach to the existing city and its populations, as pointed out by the Sustainable Development Goals. From this privileged viewpoint, conclusions will propose a critical reading of current narrative and keywords (as “intersectoral”, “multilevel”, “integrated”) in political and academic discourses are far from the everyday life of local administration.

Mario Paris is an architect with a PhD in Urban and Regional Planning (Universidad de Valladolid, Spain). He works as a researcher and consultant (Urb&Com Lab, Instituto Universitario de Urbanística). Validated as URBAct ad hoc expert and MC COST, he currently teaches urban planning and urban design at the Politecnico di Milano (Italy). His field of research focuses on the settlement strategies of service functions in metropolitan areas, with a specific focus on their impacts on local economies, spatial patterns, and territorial vocations. In parallel he has also conducted studies on the production of spatial knowledge to support territorial governance and urban regeneration at metropolitan scale thanks to a research fellowship financed by Città Metropolitana di Milano, and on the role of luxury as a driver of urban transformation. He is the author of a variety of articles and essays in Italian, Spanish and English published on scientific journals and monographies, like “Urbanistica dei Superluoghi” (Maggioli, 2009) and “Practicing a Polycentric (Post) Metropolis“ (AESOP YA, 2019) written with A. Balducci".