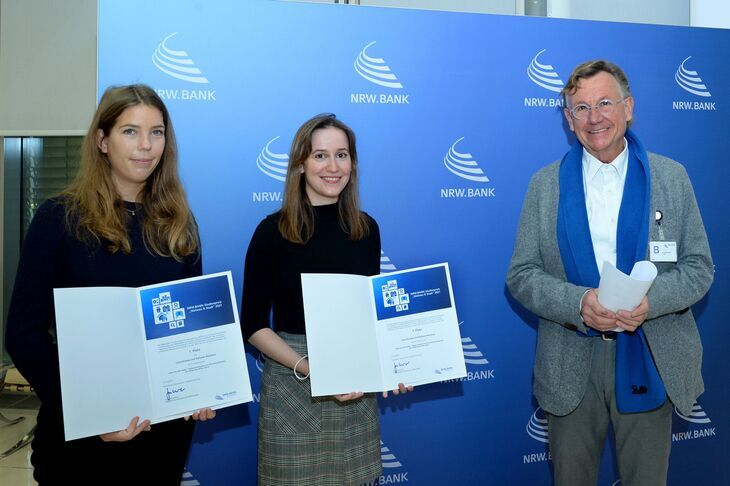 How can redevelopment-ready housing developments from the 50s, 60s and 70s best be used to create more affordable living space? How can the neighborhood structure in cities be strengthened through spatial planning? And how can the health of socially disadvantaged children be promoted through targeted neighborhood development? Today, for the 13th time, NRW.BANK awarded the NRW.BANK.Studienpreis “Wohnen & Stadt” for theses that scientifically get to the bottom of such topics. The competition takes place every year and is endowed with a total of 6,000 euros.

"With the study award, we want to encourage young academics to take a fresh look at the mostly complex issues of urban development and to develop innovative and implementable recommendations for action," says Dietrich Suhlrie, member of the Board of Management of NRW.BANK.

The thesis deals with the future development of row housing estates from the post-war period. The increasing pressure on the housing market in growing cities has led to an upgrading and more intensive use of space in existing urban structures in recent years. In particular, there is great potential for creating more living space in urban areas in the loosened up development of the row housing estates.
By creating a general toolbox, the work shows options for action that play an essential role in the further development and adaptation of settlements from the 1950s to the 1970s to today's requirements. This toolbox was used in an exemplary design in Moers Meerfeld.
In the draft, four different ways of dealing with the existing estate are developed. In the north-east, the existing line structure is carefully supplemented by a further high point and three new buildings, creating a clear zoning of public, semi-public and private spaces. In the north-western construction site, the structure of the existing structure is preserved and enhanced by activating the surrounding green area. In the middle construction field, the grouping of the rows with new buildings creates courtyard structures with subordinate neighborhood points. The row house development in the south-east is rounded off and thus connects the settlement with the surrounding area.
Despite a high level of densification, the design has the flowing green space typical of that time. This is played out more intensively by means of different uses of open space. The addition of two further high points to the existing solitaires deliberately emphasizes the harmonious interplay of the horizontal and vertical structures.
The additional high points translate the design of the existing solitaires, but are made legible from the existing structure through a clear change in material.