You Are Here: Johannes Göderitz Prize "The new city" 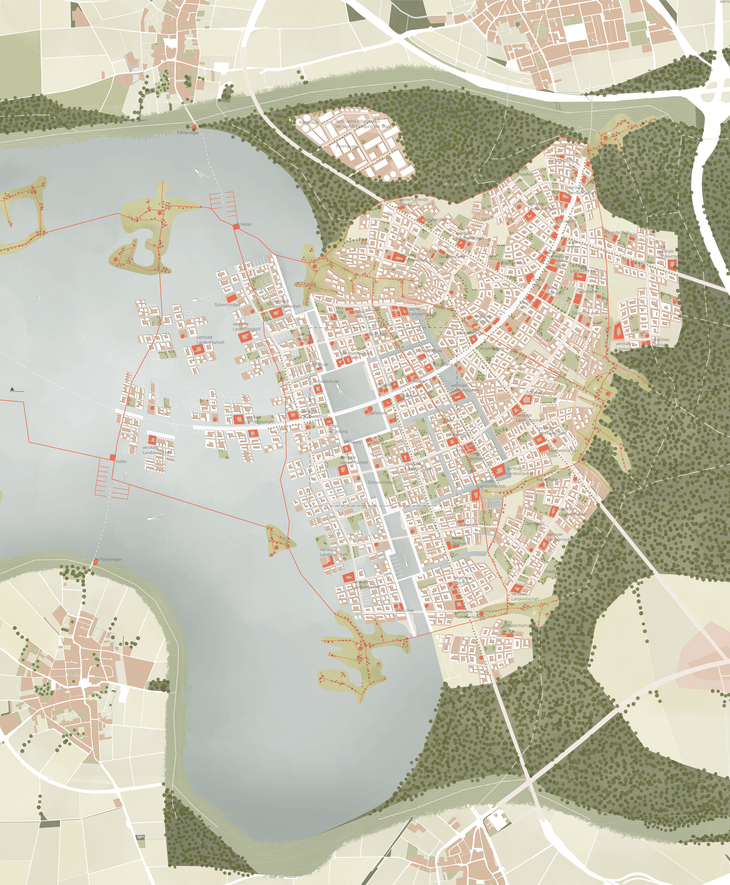 In the Rhenish coalfield, the reclassification of the Garzweiler open pit mine offers the opportunity to answer important questions for the future, such as the development of new mobility concepts, dealing with climate change, new possibilities due to advancing digitalization and the testing of innovative structural and spatial concepts, by planning an exemplary city in a special location. For this reason, a new city for approximately 50,000 inhabitants is to be gradually built on the site of the Garzweiler open pit mine starting in 2025. Within the framework of the Johannes-Göderitz competition, spatial and functional structures for this new city are to be developed and transferred into an urban design. The impulse for the new city foundation is the Olympic Village for the 2032 Summer Olympics, which is to form the main or a secondary center of the new city after the conclusion of the Olympic and Paraolympic Games. Decisive for the quality of this new city is a high degree of independence and autonomy. In addition to a unique urban idea with a high identification potential, the new city should, as far as possible, fulfill all the functions of a fully-fledged city. Since polycentric urban regions are considered the most sustainable model of spatial development in scientific discourse, this city is to prove that the idea of a polycentric urban landscape can be implemented in the Rhineland. The plan area is located on the eastern shore of the future residual lake of the Garzweiler open pit mine, approximately where the open pit mine is located today. The area of about 21 square kilometers is bordered by the A46 motorway in the north and by the new A44 motorway in the south and east. The design offers the opportunity to negotiate future-oriented topics here and to show new perspectives.

Paula Erckmann and Eva Krings on their project:

With the lignite phase-out, the Rhenish mining area is facing extensive change. In the course of this, a new city foundation is proposed at the Garzweiler open pit lake that counters the settlement pressure of the surrounding metropolitan regions while pursuing sustainable land management. The village of the 2032 Olympic Games in the Rhine-Ruhr region serves as the nucleus for the new city at the Garzweiler open pit lake. From this, a lively, resilient and flexible city can develop in the following years and decades, offering a high quality of life for a colorful, grassroots and networked society. The central design themes here were dealing with the former villages and structures that were lost due to open-cast mining, the formation of a polycentric system for a "city of short distances" as well as the location on the shore of the open-cast mining lake and the linking of water and land through the new city of Püttweiler.

We congratulate the award winners on their success!