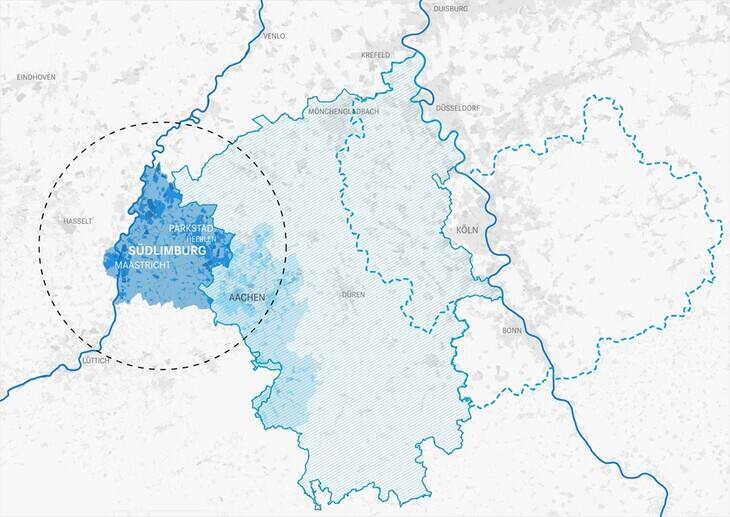 Location of the area under consideration in a regional context. Focus is on South Limburg in the euregional context and direct proximity to Aachen, Hasselt and Liège.

The challenges beyond the borders are similar: the Netherlands and Germany face urgent tasks that are important locally, nationally and globally. The tasks concern climate change, the energy transition, the circular economy, infrastructure, mobility, health and housing. In concretizing a new standard supported by policy, it is necessary to create space for new initiatives and experimentation both in terms of processes and outcomes.

The following thematic priorities have been formulated for this reason:

The following cross-sectional topics are added to the consideration of space:

With the integrated view, spatial visions and strategies for a spatial development program are created. In this way, the project will make a significant contribution to strengthening the spatial quality of the euregional Zuid-Limburg area.

Placement of the project in the goals of the Regio Deal

The main objectives of the Regio Deal Parkstad Limburg are firstly the "strengthening of the socio-physical viability" and secondly the "strengthening of the spatial and socio-economic structure". This is followed by ZL'EU with its integrated strategy for the region. With the cross-border spatial strategy, the project forms the basis for the cooperation between the Regio Parkstad Limburg and the Städteregion Aachen. It helps to seize opportunities and remove obstacles that citizens and businesses face when it comes to living, working, recreating and experiencing culture across borders. The project also strengthens the euregional mindset of citizens and businesses by organizing and supporting accessible, cross-border participation formats around integrated planning.

A project of L'EAU

The project is carried out in the framework of the Laboratory of European Augemented Urbanism, L'EAU. L'EAU is a platform for innovative and international spatial cooperation, in one of the most important cross-border regions in Europe.

Together, the trinational agglomeration between the Meuse and the Rhine will be developed and shaped into a central knowledge, technology and service region, which are interrelated, independent of administrative borders.

The tri-national agglomeration between Meuse and Rhine is a unique region in many respects: its location makes it one of the most important cross-border regions in Europe and, at the same time, with the help of RWTH Aachen University, a central knowledge, technology and service region that is interrelated independently of administrative borders.

The accompanying processes, layers and structures in settlement-geographical, economic, ecological, social and (building-)cultural respects are picture-forming.