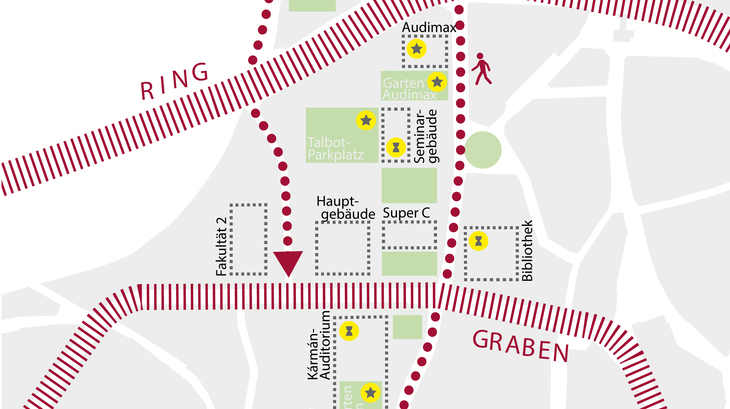 Since 2019, the Chair and Institute of Urban Design has been an initiator and founding member of theInitiative Urban Central Campus, which develops visions for the inner-city campus around the RWTH main building and at the interface to Campus West. After years of focusing on campus expansion in peripheral locations such as the Melaten Campus, activities are now also concentrating on the historic city center campus.

In various workshops, needs for action and areas of potential for improving and revitalization of the inner-city campus have been formulated. In addition to the various departments, building management, the university library and the rectorate of RWTH Aachen University, representatives of the building and property management company and the city of Aachen are also involved in the initiative.

In addition to the Initiative, the Chair and the Institute of Urban Planning are also involved in various projects in teaching and research, such as the Leonardo Module 2019 "From “ivory tower” to knowledge city", which deals with the future development of campus areas.

Below you will find a best-of of the versatile, student designs and concepts for the Urban Campus Mitte in Aachen.

Partners of the initiative